End Unequal Relations between the Philippines and the U.S.! Surrender Smith Now! 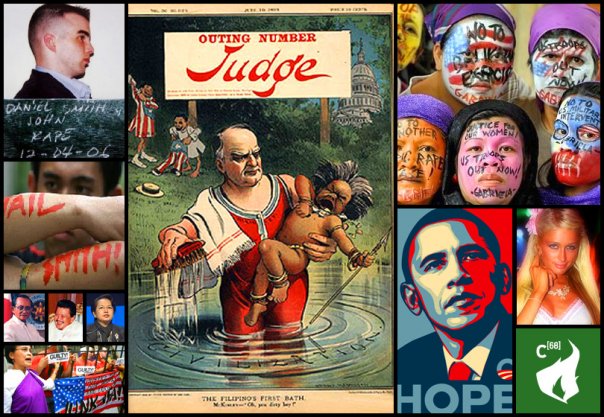 Image Key (L to R): U.S. Marine Daniel Smith, convicted rapist; Philippine youth at protest with "Jail Smith" painted on arms; Former Pres. Fidel Ramos who began groundwork for the VFA; Former Pres. Joseph Estrada who enacted the VFA and was the second Philippine President to be ousted through protest; Pres. Gloria Macapagal-Arroyo who's in the running to be the third ousted president given the human rights abuses of her administration, recorded conversations citing election fraud, and her loving embrace of the VFA; "Junk VFA" protest; Judge (the turn of the century equivalent of Time and Newsweek) cover cartoon depicting Pres. McKinley giving the Filipino his "first bath" in the waters of "civilization" while Puerto Rico and Guam put on their red-white-and-blues after their bath-time with the U.S. champion of expansionism; GABRIELA woman's coalition protesting the handling of the Subic Rape Case, U.S. Intervention, and the VFA; Hope!; Paris!; Cell68's special brand of Razzle-Dazzle.

BAYAN USA and GABRIELA USA spear headed a national petition to  garner support to terminate the Visiting Forces Agreement (VFA) and end unequal relations between the U.S. and the Philippines.

You can help bring “Hope & Change” to the unequal relations between the U.S. the Republic of the Philippines.
[ For a larger view of the attached image for this post, click here. ]

In November 2005, U.S. Lance Corporal Daniel Smith and three other U.S. Marines were accused of raping a Pinay (Filipina woman), tossing her out of a van, and driving away. Smith was convicted of rape by a Philippine court in 2006 (the other three-Lance Corporals Keith Silkwood and Dominic Duplantis and Staff Sergeant Chad Carpentier-were acquitted on the grounds that they were either “only” watching in the van and cheering Smith on or could prove they were buying pizza when the incident happened).

Despite being convicted, Smith never spent a day in a Philippine jail. Instead he’s been detained in the U.S. Embassy.

Fast forward to February 2008 when the Philippine Supreme Court declared Smith’s detention in the U.S. Embassy illegal and that he should have instead been serving time in a Philippine jail; they called for his transfer to a Philippine jail, just like the rest of the criminals who break Philippine law. The U.S. government countered by citing a provision in the so-called Republic of the Philippines-United States Visiting Forces Agreement (1999) which allows the U.S. custody of erring American soldiers (aka “Those who done F%#*D up while on duty…and actually get caught, usually by someone other than U.S. Military”).

Interrupting American Analogy for Illustrative Purposes: You know how Paris Hilton was convicted and was sentenced to 40+ days of jail time, but instead of serving it she was able to be detained in her home instead? Why? Because she’s a celebrity with status and money-she’s not just “cute” (so up for debate), she’s also the heiress of the Hilton fortune. Boo. Foul-play. You suck!Not fair, right? If you or I did what she did, we’d be serving our time…no doubt.

Anyway…folks in the Philippines are calling for an end to the unjust Visiting Forces Agreement (VFA), a decade old treaty which was unfair to begin with, supported by Former President Fidel Ramos, and put into effect during Former President Joseph Estrada (one of two Philippine Presidents to be ousted for abusing their power and prioritizing the interests of the U.S. and others before those of the Filipino People who “elected” them…the Filipino people are working on adding a third President to that list). In addition to protecting American Soldiers who break Philippine Law, the VFA also:

So to my American friends… It’s 2009. We now have a President who’s being held up as symbol of Hope and Change. The poor guy’s gotta clean up the mess of his predecessors-President McKinley who led unprecedented American Expansionism which led to the acquisition of Puerto Rico, Guam, and the Philippines as American territories, and President Bush II, who…well…you know. Do we sit by and let things like the VFA create unfair and unequal relationships between our country and others like the Philippines? Remember how we were all so “bummed” on Bush because he “made us look bad” to the International community? What’s up? Do we, as American citizens, agree that our government can go against the Supreme Court decisions of other nations on our behalf? Or is it time for Obama-esque “Hope and Change” razzle-dazzle?

If you think it’s time for some good old-fashioned razzle-dazzle for justice, check out this petition and consider signing it:

After that, just do your best to continue to stay up on what’s happening in the world. These are some “crazy times”, as folks are fond of saying…over…and over…and over. Bush is out, Obama’s in, CNN’s finally freely using the R-word (aka “Recession”) to describe the current Global Financial Crisis, and Kanye West performed on American Idol. Crazy times, indeed. So let’s continue to navigate these times together. It’s a good time to say that I really appreciate the folks who have been keeping my mind active here on Facebook, sharing petitions, articles, and opinions on their profiles. It’s definitely been a great tool to connect/re-connect with people and share stories and ideas as well as the ever-awkward Pokes and oh-so-stirring games of Scrabble. I think that’s a good use of this fancy Internet thing. Let’s make this whole “Global Village” a smart one.